Map of the 84 nations associated with the International Organization of la Francophonie — 54 members, four associate members and 26 observers.

A new organization has joined the fight against human rights violations and discrimination suffered by sexual and gender minorities (SGM) in French-speaking countries. Two members of the group introduce it here.

By Dominique Menoga and Michael Cousin 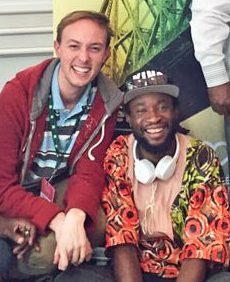 The IGLF Coalition (the Global LGBTQI Francophone Initiative) brings together 11 associations working on behalf of sexual and gender minorities (SGMs) We are spread over eight countries, but our network extends from America to Oceania through Europe, Africa and Asia. As members, we are working toward a shared goal — to end governmental and societal repression of sexual and gender minorities.

The coalition is still a work in progress. We are open to French-speaking SGM organizations. We will together to build common tools, strengthen our advocacy and our community research, and to attract donors. We will also increase the visibility of French-speaking organizations with international institutions.

The idea of ​​creating a global Francophone LGBT initiative dates back to 2012 during a meeting of French-speaking activists at the ILGA World Conference in Stockholm. The IGLF Coalition has been incorporated since May 2017 and is registered in the Official Gazette of the French Republic under number W751232292. The following legal entities belong to the Coalition:

Eligibility for membership in the coalition is based on a few criteria. First, applicants must respect our four values: non-domination, non-persecution, non-exclusion and non-moral judgment. This implies, for example, accepting battles for surrogate motherhood, medically assisted procreation, civil unions, and fighting for the rights of sex workers. The principle is that SGM people do not harm others and join us to defend their rights and public policies.

Secondly, applicants must understand that we do not distribute funds. Our coalition model seeks to break with current North-South economic relations, so that there will be less structural dominance and so that ideas, choices and priorities can more easily be discussed and respected. Our coalition is therefore designed with common objectives and a common framework in which each person can define his own strategy and his own projects.

Logo of the IGLF Coalition

Lastly, we do not accept HIV / AIDS associations as members, even if they give priority to the defense of SGM people. Our goal is that SGM activists who want to join forces to defend their rights and advocate public policies can seek support in our coalition for their own development.

In terms of our current operations, our coalition is composed of a constituent committee and a constituent assembly. The constituent committee corresponds to a work team of some sort. It is composed of different secretariats L, G, B, T, Q. In our final bylaws, however, we are thinking about decompartmentalizing these Western and political categories and opening ourselves to the languages ​​and representations of the societies covered by the French-speaking world. For that reason, we are using the term SGM in this article rather than LGBTQIA2SBDSM +++.

The committee also includes a representative who, as its title indicates, represents a collective will, in particular to negotiate the contracts of the Coalition with donors. There are also two associate officers — one focusing on communication and one for membership. These positions are held by member associations of our organization. The committee works on an agenda that has been approved by the assembly. The assembly accepts, amends or rejects projects proposed by the committee.

Finally, we act in accordance with the four values ​​defined in the preamble of our statutes: non-domination, non-persecution, non-exclusion and moral non-judgment. These values ​​derived from so-called minimalist ethical reflections on negative political freedom. We also respect ten international treaties (see below) and wish to enhance them in our advocacy and research efforts.

“To those who are lesbian, gay, bisexual or transgender, let me say: You are not alone. Your struggle for an end to violence and discrimination is a shared struggle.” — U.N. Secretary-General Ban Ki-moon
Loading Comments...
%d bloggers like this: