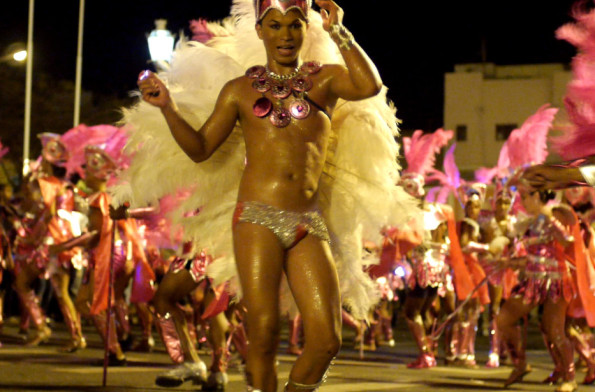 Carnival scene in the film “Tchindas”

The film “Tchindas” was shown on July 22 in Douala, Cameroon, as part of the Écrans noirs (“Black Screens”) film festival. It’s an important, heart-warming film about acceptance of the LGBTQ community on an African island, but few members of Douala’s LGBTQ community turned out to see it. 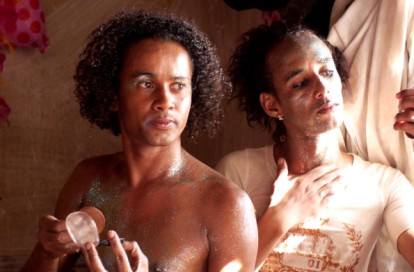 A scene from the movie “Tchindas”

As the screening started — much more promptly than is the custom in Cameroon –  barely four people were in the theater.  By the end, fewer than 15 people were on hand to see it.

“Tchindas” is the endearing and funny story of a band of three transgender and homosexual friends who are passionate about dance and who put their energies into preparing for the great carnival of Cape Verde.

They work with the children and others from their neighborhood to prepare for the big event. The film features the leader of the group, the trans woman Tchinda, whose popularity has turned “Tchindas” into the same for all LGBTQ Cape Verdeans; sweet Elvis; and young, sparkling Edinha.

The children who participate in the adventuresome preparations see beyond the ways that the three friends are different from others.  They and their parents see the friends’ worth as human beings. They value their love of their art.

A scene from the movie “Tchindas”

While the Carnival preparations are under way, a newspaper  article appears that is devoted to Tchinda, who is described as an interesting person, who is asked whether she is a woman. The article is not necessarily negative. It makes Tchinda smile and she is joined by the group (including men) who hear her read the article.

In their conversations, we hear that homosexuality is fairly widespread in Cape Verde. Tchinda and her friends make the remark that there are many more gays in the neighboring neighborhood. A craftsman who helps produce materials for the carnival jokes with Tchinda about where he should have been born.

“Tchindas” is a story of transgender and homosexual people who are  mocked or stigmatized by those around them. As one Cape Verdean woman states:

“We are all children of one God, because the sun shines above us all.”

On the day of Carnival, our three heroines are more beautiful and radiant than ever. They shine, and it is clear that they live for this day.

Edinha is perched on high in a more seductive outfit than that of the girls who parade and dance to the side. Elvis, we see, is happier and more fulfilled than ever. Tchinda, marching in front of the troops, shows her pride at what has been accomplished.

At the Douala theater during the show,  no animosity was to be seen. One woman watching Edinha on the float remarked, “Oooh! See them perching up there. They’re not even afraid!”

Yes, at that moment, with Carnival in full swing, we don’t see differences; we just see talented people and the show that they have created.

Art like this brings people together. It’s too bad that so few people from the LGBT community of Douala were there to see it.

Erin Royal Brokovitch, the author of this article, is an activist for LGBTI rights in Cameroon who writes under a pseudonym.

2 thoughts on “Cameroon: Small audience for an important LGBT film”