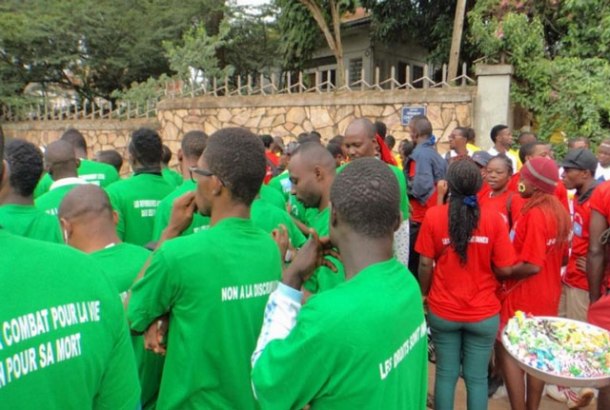 Camfaids organized a march in 2015 through the streets of Yaoundé, Cameroon, in support of human rights defenders. (Photo courtesy of Camfaids)

Confronted with physical assaults and death threats, the Cameroonian LGBTI advocacy group Camfaids has temporarily closed its headquarters, which also serves as an LGBTI meeting place and as a refuge for victims of homophobia. Camfaids officials said the closure, which occurred July 17, will continue while the organization seeks financial support for improved security.

Camfaids announced the closure this week in a press release, which is loosely translated here:

At the Camfaids center, a Camfaids member sorts gifts for distribution to LGBTI prisoners. (Photo courtesy of Camfaids)

We, the Cameroonian Foundation for AIDS (Camfaids) hereby inform you of the dramatic situation we have been living with for several weeks at our headquarters in Titi Garage, Yaoundé, Cameroon.

That headquarters has gained prominence through our various activities, such as educational lectures, human rights conferences and many others focused on LGBTI people, in particular the transgender people who have been the focus of many activities. This situation has troubled some of our neighbors, leading to physical and verbal violence against us, including:

Today, we are victims of insults, mockery, discrimination, anonymous threatening letters addressed to Camfaids leaders that threaten them with expulsion or death.

All this causes us anxiety, panic and phobia, which hinders the activities of Camfaids and depresses the staff as they realize how profoundly insecure they are. This has led us to close the Camfaids center for an indefinite period starting  July 17, 2017.

In response, Camfaids, with the support of attorney Michel Togué, has filed a complaint with the Regional Division of the Judicial Police against specific people who have been threatening and harassing us.

We are still awaiting — and calling for — a response from those  authorities. We are also awaiting other interventions and support that will enable us to remedy this serious problem of permanent insecurity for our association. With that support, we will be able to resume our activities to further equal rights to health, respect for individual rights, freedoms for all, and the fight for tolerance and acceptance of LGBTI people in Cameroon.

5 thoughts on “Under siege, LGBT rights center closes in Cameroon”