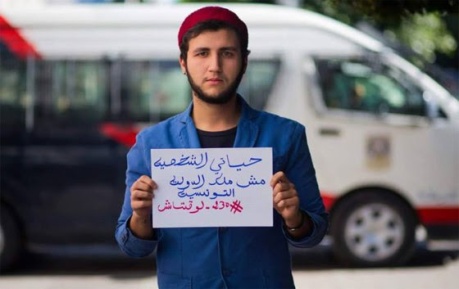 Ahmed Ben Amor has made a second attempt to kill himself

Ahmed Ben Amor, vice president of the Tunisian LGBT rights association Shams, is in critical condition after making his second suicide attempt in a month, his friends report.

Speaking to Tunisia Live, Shams executive board member and spokesperson Belhedi Bouhdid, said that on July 16, “We were with him at his house following the first attempt. He asked if we could leave him alone for some time. He took advantage of that to swallow all the pills the doctors had given him.”

Ben Amor’s second suicide attempt has confused many of his friends, as well as Association members who all understood him to be in recovery following his initial attempt. “The reasons are absurd,” Bouhdid said, “ ‘I only want to die’ — that’s what he said before losing consciousness.”

Ben Amor first attempted suicide last week, by consuming approximately 70 pills, but leaving no note to explain his actions. Ben Amor was released from hospital following treatment. … According to Shams, Ben Amor has been assessed a 3 on the Glasgow Coma Scale, the lowest level of consciousness the system records.

Audibly distressed, Bouhdid explained that Ahmed was in a “very delicate condition,” adding, “The doctors have lost hope…. We are waiting for the end of the day to see what will happen.”

In constant receipt of online abuse and death threats and excluded from mainstream Tunisian society, largely because of his activism, Ben Amor has established a reputation for himself as a fearlessness campaigner and activist for Tunisian gay rights.

With Ben Amor’s prognosis looking increasingly guarded, Boulhdid concluded his comments by saying, “It is really sad. Only a miracle can save him. We are just waiting.”

Ben Amor was transferred to the emergency medical assistance center (Camu) in Tunis, where he was placed in intensive care, the Tunisian news website Realities reported.

On July 9, Ben Amor made his first suicide attempt by ingesting a huge amount of drugs.

8 thoughts on “Tunisian activist in coma after 2nd suicide attempt”